The past week has seen a lot of progress on the Datalogger.

The event-driven non-blocking FAT32 library I posted about earlier in the year was integrated into the logging module and after some initial hiccups is now working well.

EGT probe support has been integrated into the CSV logging. The logger checks if to see if there is a probe connected at the start of each log run, and adds the EGT column if required.

The big news - for me anyway - is that logging to Tuner Pro XDL format is working. The code for the XDL log format was written yesterday - based on the reverse engineering done for the Nanocom conversion as posted previously - , and a small bug in a log buffering code which prevented the logs writing to card was fixed this morning.

I've only had a chance to do a few short runs around home - lots of 40kph zones and slow moving traffic. Aside from my laptop going to sleep after 15 minutes and killing the longest of the logs, the logging seems to be pretty stable.

This evening I looked up my test ECU and eft the logger run on the bench recording to XDL for a bit over three hours without any issues.

As a bit of a teaser, this is a screenshot of Tuner Pro RT tracing from a log I recorded today.
The black spots on the tables indicate the current running point. 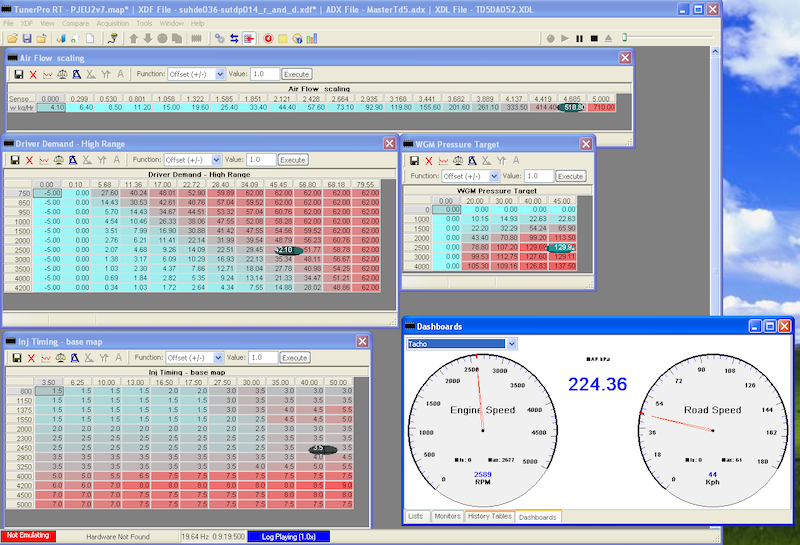 None of the parameters being used are calculated - it's all logged ECU data.

The to-do list is still pretty long, but I'm now feeling far more optimistic than I was 3 months ago.