As I posted previously, I've been working on a tool to enable "brick proof" programming with the Nanocom.

To quickly recap the NNN ECU's have internal protection against failed uploads.

This relies to two things:

While I've seen a one or two .maps with what look like corrected checksums, all have the verification words set to the "successfully programmed" value. This means if the upload fails the ECU reads these values and proceeds as if the ECU has been correctly programmed. If the upload fails at any time after the fuel map verification word has been programmed you are guaranteed a bricked ECU.

Fortunately the Nanocom runs the verification routine after each part of the ,map is programmed.

To take advantage of the "brick proof" programming all we need to do is update the checksums and set the verification words to 0xFFFF.

After a bit of messing around I've ended up porting my Python checksum code across to a Tuner Pro plugin.

This was fairly quick, although I wasted most of today messing around trying to work out why the variant checksum wasn't correct. I finally created a fresh map from Nanocom map wizard and the checksum calculated perfectly. 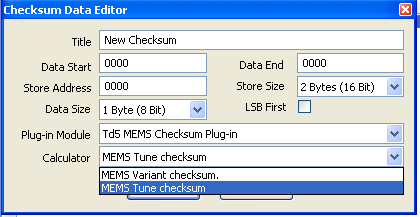 Most of the configuration is embedded into the plug-in and the only additional setup required is the data start and end addresses.
This has primarily been done to allow the XDF's to support "weird" formats like the MEMS3 Flasher dumps.

I've tested the plugin on Windows 10 and XP and seems to work on both.

The current XDFs for Nanocom .map formats come with the plugin preconfigured.