While things have been fairly quiet on the site recently, that hasn't really been a reflection of the level of work that has been going on at the DiscoTd5 Lab for last three or four months...

The datalogger had pretty much been dumped in parts bin as the level of work required to get it up to a useful state seemed to be overwhelming. Conversation with an enthusiastic D2 tuner convinced me to take another look - on the basis of build it or bin it for good.

Three months later, and hundreds of hours rewriting the code, it's slowly starting to come together.

The biggest chunk of effort - which has basically eaten the last 4 weeks - has gone into writing a SDCard // FAT32 library from the ground up. This was the obstacle that had resulted in the project being shelved previously so it's been a significant hurdle to overcome. There is still work to do but there is now light at the end of the tunnel.

It might seem a bit bizarre to be writing a FAT32 library from scratch when there are well established products like the ELM Chan FATFs available.
The main issue has been that the logger code is written in a way that requires components to be non-blocking. Blocking code will prevent any other code running while the blocking waits in a loop for something to happen - it literally blocks progress.
ELM Chan's FATFs is blocking in that it waits for SDCards to come out of busy state before proceeding. The issue here is that at times cards can be busy for extended periods - 50ms is not unusual even with a good quality card like a SanDisk Ultra. With poor quality cards wait times of 200ms+ are not uncommon.

Where this becomes a problem for a Td5 data logger is that the default time between an ECU response and the next "tester" request is 25ms.
The Nanocom Evo solves the problem by making a series of requests - one log line of data - then writing that line to file. There is a 600ms+ pause between the end of one block of data, and the start of the next which is plenty of time for even the slowest junk SDCard to finish writing and return to idle state. But this also means that the Nanocom is writing one line of log data every 1.25 seconds. Fine for some purposes but a lot of dynamic behavior "falls through the cracks" - the torque reduction of an auto shift completes in under 300ms for example, so is effectively invisible.

The approach I'm taking here is to use non-blocking code with DMA (direct memory access) transfers of data to the card. The DMA transfers effectively run in the background without processor intervention, so the combination means that the processor only needs to setup the write to the SDCard, and then can resume more important tasks like reading data from the ECU, or other sensors. The issue of wait times is dealt with by buffering the data waiting to be written to card. In theory all this will allow data rates 10-15 times faster than the Nanocom to be written to card without delays caused by slow card writes.

An excuse for new toys

One of the issues I'd have was that my old Saleae Logic - an original and now much cloned 8 channel 24Mhz job - is starting to show it's limitations when trying to capture communication with the SDCard at 20Mhz bus speed. To capture a signal you need at least twice the frequency of the signal - so 40Mhz at least - ideally you oversample at x4 so 80Mhz. With the old Logic I was flying blind.
As much as I love the Saleae and the software, a new Logic 8 Pro which has sufficient speed for this task was prohibitively expensive - 700-800USD.

So I've ended up with an open source design analyser that does either buffered or streaming captures. The buffered captures are made to internal memory, and have fairly limited length of capture. around 1 second @100MHz using 4 channels, and 300ms @ 400Mhz using 4 channels. Streaming captures are sent over usb to an open source, cross platform application based on Sigrok. The buffered captures are limited to 100Mhz with 3 channels, or 50MHz when using 6 channels. For the SDCard work I need 4 channels and long captures so need to use the 50MHz/6 Channel option. So not perfect but it's flexible enough to be quite useful. Best thing was that it's far more affordable at $150USD. 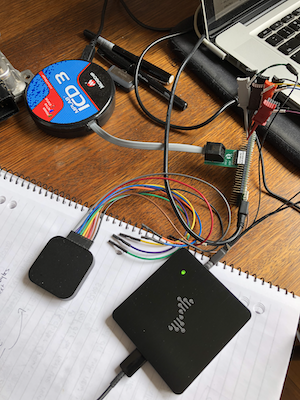 The Logic is the small black square on the left, the DSLogic Plus on the right is significantly bigger but still fairly compact.

And the DSLogic proved it's worth within an 30 minutes of unboxing. I'd had an issue where the code would run perfectly with the Saleae connected but would then fail as soon as I disconnected.
It's a real catch22 - the bug occurs only when your debugging gear isn't connected... makes troubleshooting fun. The DSLogic has coaxial probe leads which significantly reduce the effect on the signal being monitored compared with the Saleae's flying leads. There is a great comparison of a Saleae clone and DSLogic on the OpenTechLab channel on YouTube - the sims of the effect of flying leads is quite an eye opener.

The video above mentions the probe clip quality. The ones that came with mine seem to be cheap knock-offs of ez-hooks. Not quite as clunky as those seen in the video, but hook wire is pretty flimsy compared with ez-hooks.

The upshot was that even with the DSLogic connected the "undebugable" bug was occurring every time a card was inserted, and it was straight forward to isolate where and why the code was failing.

The software is fairly good but a bit rough around the edges at least under macOS. I have a bit of trouble with zooming using the trackpad - it's clearly designed for left and right buttons plus scroll wheel. Protocol decoding seems accurate but is slow compared with the Saleae app, although to be fair10 second captures at 20Mhz were regularly bringing that program to the point where a force quit was required, and in one instance a full reboot.

For the money it is pretty decent, and the cross platform software is a big plus in my book.
Worth noting that the DSLogics sold on eBay are not covered by a manufacturers warranty.
I opted to purchase direct.