I'm currently working on new method for generating XDF's which is providing a chance to streamline the process.

One issue that has been bothering me is that significant portion of the NNN XDF's are redundant. This occurs because the XDF's are currently created based on the variant-fuel map pairs in each .map file.

Neither of these differences have any impact on how the XDF defines the tables and constants within the fuel .map. A small number of NNN EU2 maps have additional differences in 5-6 constant values but again the structure of the fuel map is the same, so one XDF definition can edit both versions.

So the upshot is that the next release of the XDF's will be based on the fuel map identifier only, and this will reduce the number of NNN XDF by about 30-40%.

Tuner Pro has the ability to auto load XDF's when a .bin / .map is loaded. Unfortunately this must be manually configured but it saves a bit of messing around once it's configured. It's usable with current versions of the XDFs but will make more sense when the XDFs are consolidated. 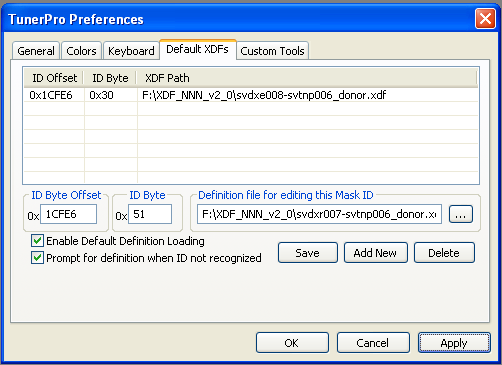 These are the offsets for the current NNN XDFs.