This is the first of what should be a series of posts which provide a little more detail about how the maps fit together.

The individual flowcharts are too large to embed while maintaining any kind of legibility so the full content is attached as a pdf at the end of the post. 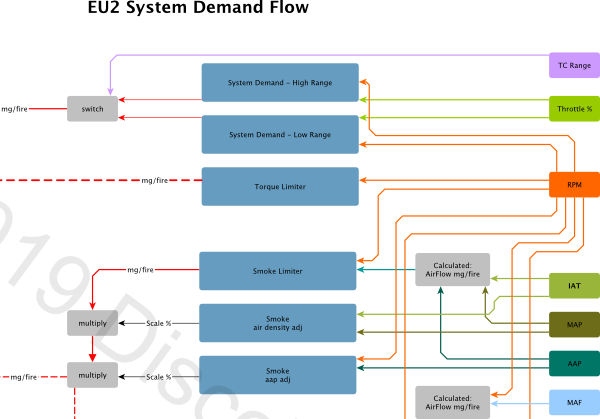 The current flowchart covers the operation of the EU2 "System Demand" (aka Driver Demand) map and Smoke limiter.
"Driver Demand" is used in Land Rover docs to refer to the throttle position - not the maps. Another reason for describing these maps as System Demand is that the Cruise Control controls speed by using a calculated throttle % that substitutes for the "driver demanded" throttle % as the input to the System Demand maps.

The flow chart includes mention of a "new" Braking IQ map - this is currently marked as Map010 for D2, and Map011 for Defender in the NNN XDFs. Note that these maps are effectively disabled in all tunes - the "limit" is set to 100mg/fire so has no effect - but I have included as they are "active" in the sense that if you modify to a point where the values are lower than the smoke limiter the map will alter engine behavior.

Also note that the Manual maps include Autobox code and vice versa, so the Auto Torque reduce checks are used in Defenders and D2 Manuals.
The maps will have no effect, but the checks are there.

There is a scalar which selects between IAT and ECT as the temperature input to the Smoke air density adjust map. I believe this is set to IAT for all tunes so this hasn't been included to keep things simple.

Cranking IQ, Autobox Torque Reduce IQ and Idle governor IQ calculations are quite complex so are treated a "black boxes" for clarity.

The three final boxes at lower left are parameters that are used in the Torque Limiting routines.

The EU2 Torque Limiter operation will be covered in the next post.